16 missiles loaded with chemicals, not the usual loud, destructive missiles, but missiles carrying death in their sleeves drop on the besieged people asleep in their beds. People dreaming of a beautiful life, children excited for the morning.

Reports varied about the number of victims, but there were more than 1,400 dead; in just hours in one night. The world woke up to the worst massacre in contemporary history, internationally prohibited chemical weapons had been used.

The story in a nutshell…
We were sleeping and suddenly we heard loudspeakers calling to close the doors and for no one to leave his house; put on masks if you have them–we were targeted with chemical weapons.
Those who can help, please come.

For the record, the Ghouta area was besieged and we did not even know how we could stop the spread of toxic substances. All we were doing was spraying the victims with water, cola, and vinegar and using asthma and oxygen sprays.

The sky’s color changed, the world was awake and screaming, the people rushed around, what was happening? Breath-holding moments, as if we were living in a horror movie, horrific scenes, people falling, and then the rescue teams started breaking down the doors of the houses and taking out the injured.

Foaming at the mouth, hallucinations, shortness of breath, suffocation, loss of consciousness, and death. No blood, no gashes or wounds, nothing, just poisonous air.
People on the ground, screaming and terrified,
Souls were taken from bodies in a heedless time.
The victims were primarily children with no names or date of birth, only numbers recorded on their foreheads.

This is the price of freedom, and this is what we paid! Do you think we will reconcile with those who killed us?

Not the first time, but the third of its kind, twice in Ghouta and once in a city called Khan Sheikhoun. This is what we paid for freedom, for what??? For freedom, which is a basic demand of the people!

This memory will remain firmly in our minds forever, and we will tell it to the next generation, we will keep reminding the world of it, it will remain an immortal massacre in modern history, and it will remain a disgrace. 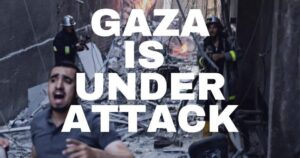