For 11 Years Syria Has Endured The Worst Things Imaginable.

For 11 years Syria has endured the worst things imaginable–bombs, missiles, murder, imprisonment, torture, destruction of homes and schools and hospitals.

All of this started with Bashar al Assad’s campaign of genocide against the Syrian people.

Assad told the world that the Syrian people were terrorists, ISIS or worse, and needed to be destroyed. Meanwhile he murdered civilians who had never harmed anyone in their lives.

He was helped by Russia and Iran who came quickly to help him kill children and babies, innocent civilians.

The worst humanitarian crisis in history is ongoing in Syria.

Millions of people are homeless and displaced, living in tents or on the ground.

Millions of people have been violently killed, disappeared, imprisoned, and tortured.

Families have been torn apart. The lucky ones escaped to other countries for refuge.

Now the world is seeing that Assad and Russia lied.

Much of the world stand with Ukraine, and we do as well.

But please see that we are all the same. No matter the skin or hair or eye color–we are all human beings who have the right to live safely. Please think fairly about this.

ALL people whether Syrian, Ukrainian, Libyan, Iraqi, European, or American; deserve to be treated the same. We need to stop those who invade and terrorize other countries!

We are not terrorists or criminals.

The terrorists are Putin and Assad. 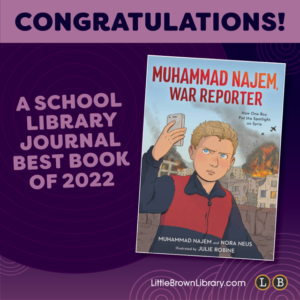 Muhammad Najem, War Reporter. Is A Best Graphic Novel Of 2022 According To School Library Journal!

Muhammad Najem, War Reporter. is a Best Graphic Novel of 2022 according to School Library Journal! If you did not get a copy of the

What If The World Cup Was In Syria?

What if the World Cup was in Syria?