My Eid Vacation In Idlib

I went on vacation to Idlib to spend the Eid vacation there with my mother and younger brother and sister, for two months.

That short period that I spent felt like two years, although I had very beautiful days there with my friends, whom I had not seen in three years, but I also had very, very sad days.

In the first days of my stay in Idlib, I went to its square and took some pictures there of me and the children, then I went to a huge demonstration in Idlib.

The first day was very exciting, my energy and the spirit of revolution returned to me while being among the children. It was an unforgettable day.

The next day, I began to go to the camps and take pictures and videos with the children there. Their smiles are still with me now as I write these words to you. Although I felt that their hearts were hurting and crying, their joy did not leave their faces.

The days I spent among those camps and with the children there, I will never forget, and I will fight until I can bring their voice to the world.

Most of them are without education.

Most of them are homeless.

Most of them are without food.

Most of them are without any joy for life.

They live their day. They just exist.

I saw a lot of young children working to help their families. One young boy was selling some biscuits. He had five biscuits and was standing on the edge of the road to sell them.

I really couldn’t stand that moment and I would never cry in front of him.

I paid him for the cookies and told him that these cookies are for you and your brothers, and then I drove him to his tent.

I’ve heard and seen so many sad stories that can’t be talked about in a few words, maybe not even a book could contain all their words.

Sad stories that no human energy can bear.

Not to mention my own past experiences, the bombing of our house, when we used to live there.

And the running people who were hit by those shells, the terror and the dust that overwhelmed the area, and the continuous screaming that was coming out of the houses because of the shells, until my younger siblings were among them–they were screaming and crying a lot when that happened.

It is not really possible to bear all this great pressure. There is no human energy that can bear it. But despite everything that had happened, the people gathered and began to provide aid to the wounded and injured.

After many were rescued, they also gathered and started cleaning the street from the rubble, and nothing changed.

People really started to live with that and it started to become a routine of their day, because it happens every day, and has been repeated over and over for ten years now.

Despite all this sadness, I enjoyed some beautiful days with my friends there and I spent time with them, and my dear friend Selim.

However, I left him injured on his bed inside the hospital before leaving Idlib and heading to Turkey.

As I prepared to pack my bags to leave Idlib, I received a phone call from Selim’s father to tell me that he had been injured and was in poor condition. He was hit by a car while crossing the street.

I packed my bags and headed to the hospital to meet him before leaving Idlib.

His condition was bad and he sustained a brain injury and a leg injury. But the doctor told us that he will get better soon, he just needs rest and time.

I left the hospital heading to the crossing to enter Turkish territory.

And my tears never left my eyes.

It is very difficult to know you live in a house when others live in a tent.

It is very difficult to be safe sleeping in a tent under the missiles.

It is very difficult to wake up and prepare your breakfast and know that others wake up with a sore stomach because they slept without food.

How can you be at peace when your people suffer every day?

My body may have entered Turkey, but my soul remained in Syria and did not come here with me. 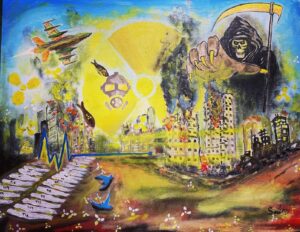